Translations of this article:

The Clangers was a children program of the BBC Television for children in the ’70. The BBC sent out to any viewers who wrote in the pattern that was written with a typewriter (and not that easy to read after all these years). 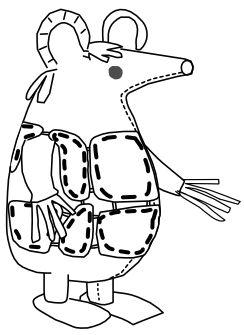 The file is the copy of the three sheets with the pictures that I redesigned. It is in English and in French in two columns.

I didn’t knit the pattern yet but it seems to be easy to make. The character is a kind of pink anteater with clothes made of big brown pieces.

The original pattern and the gallery of knitted toys.

Also in this section